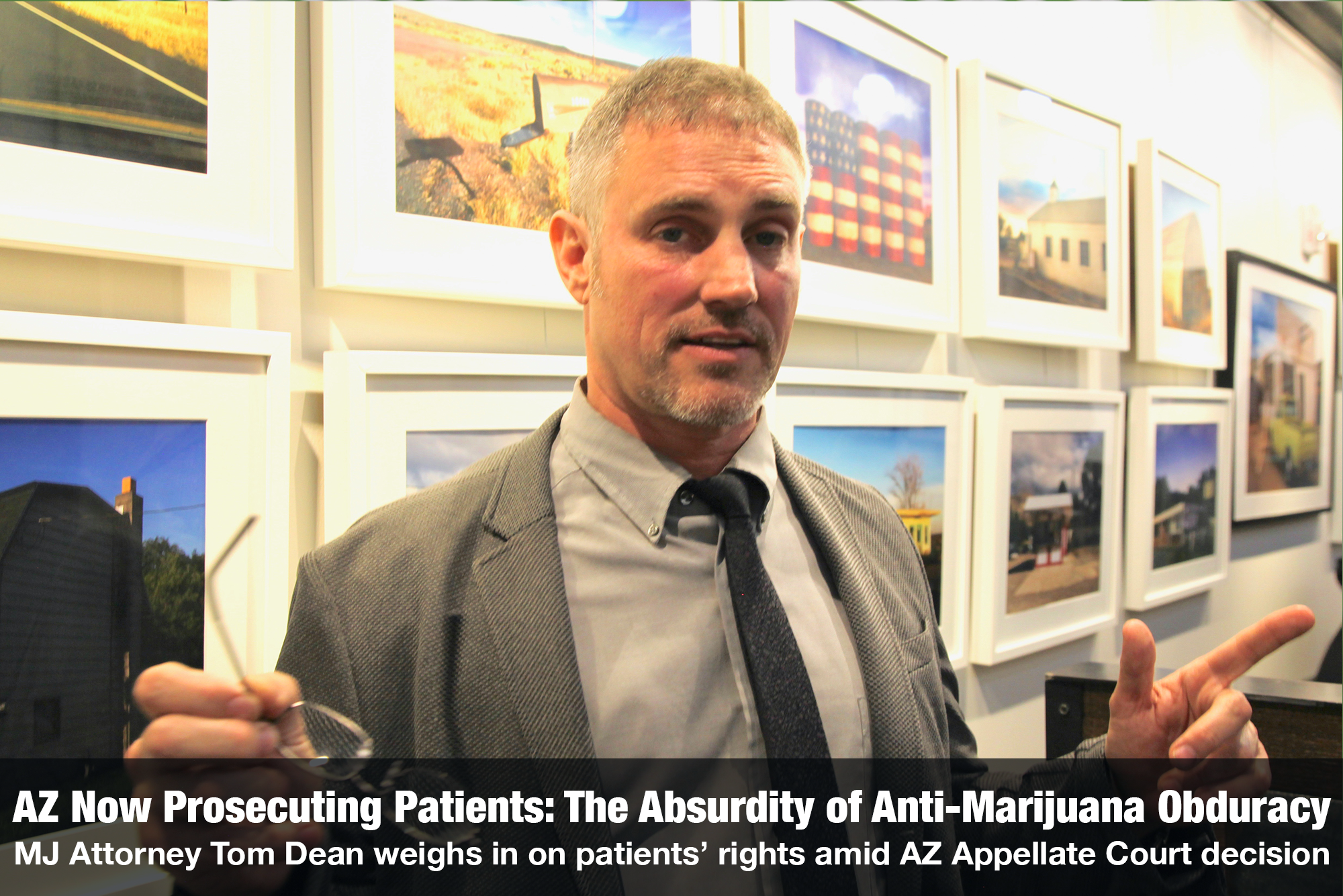 Arizona’s cannabis industry was blindsided last week by an Appellate Court ruling that essentially gutted the Arizona Medical Marijuana Act (AMMA). Two out of three justices formed the majority vote denying an appeal to overturn the conviction of Rodney Christopher Jones, a state-qualified medical marijuana patient who was convicted of felony possession of a derivative of cannabis, which he purchased at a licensed medical marijuana dispensary.

Initially arrested and charged with felony possession of cannabis and paraphernalia in 2013 — three years after the AMMA became law, he was convicted and served more than a year of his 3.5-year sentence while his appeal was pending. Upon conclusion of the judges’ final ruling, Jones was escorted back to prison, where he will serve out the remainder of his sentence.

This is a case of being in the wrong place at the wrong time. Rodney Jones’ arrest took place in Yavapai county, where infamous county prosecutors Sheila Polk and Bill Montgomery have collected millions of dollars from corporate campaign donors whose bottom lines are threatened by the cannabis industry. They have also spent millions of tax-payer resources promoting their overzealous campaigns against marijuana law reform to further agenda – and the interests of their donors, which hail from the alcohol, pharmaceutical and private prison industries.

Their relentless efforts to undermine Arizona’s medical marijuana program through abusive, falsely-conceived prosecution of unsuspecting medical marijuana patients have failed in the past. But, this time they succeeded, having found a technicality in the language of the voter initiative that conflicted with the Arizona Criminal Code, which lists cannabis derivatives, such as extracts, resins and derivatives like hashish, in a class of dangerous drugs that carry mandatory minimum sentences for anyone caught in possession of them.

In the Jones case, the Appellate Court opinion concluded that legal medical Marijuana as defined in the Arizona Medical Marijuana Act does not include cannabis derivatives. anything other than dried flower is illegal under Arizona law including Oils, tinctures, vape pens, candy, topicals, wax, hashish, and other concentrates most commonly used as medicine. In short, the ruling has short-changed patients, whose only option is to medicate using smoked marijuana, which doesn’t sit well with parents of young children whose lives have been spared because they had access to medical cannabis extracts.

Rodney Jones has paid the price. Having already spent a year behind bars, he was ordered to serve the remainder of a 3 and a half years in prison. It’s a harsh and unjust punishment for possessing the medicine he thought was legally entitled to buy. Sadly, more than 160,000 medical marijuana patients in Arizona are now on notice and the livelihood of thousands of people working in the industry are at risk of losing their livelihoods, or their freedom.

That’s the topic of today’s show and our guest, Attorney Thomas Dean, is helping to take the Jones case all the way to the Supreme Court for appeal.

Thomas Dean has been a criminal defense lawyersince 1993 and has been winning marijuana cases in Arizona for over 20 years. Tom has represented persons charged with every kind of marijuana offense, including cultivation, transportation, sales, extraction, DUI, and simple possession. Since the enactment of the Arizona Medical Marijuana Act in 2010, Tom has been at the forefront, scoring many key victories establishing and protecting patient and caregiver rights and resisting the government’s efforts to frustrate and erode the rights of cardholders. Tom has also been a trail blazer in the legal cannabis industry, working with entrepreneurs who are skilled in the cannabis trades. Having made news headlines when he recently won a precedent setting case in the supreme court that made it legal for medical marijuana patients to possess their medicine on campuses in the state of Arizona, he is working with a number of advocacies such as NORML, Marijuana Industry Trade Association, Safer Arizona and other advocacies to appeal for the Jones case in the U.S. Supreme Court. He is a co-author of the 2018 Safer Arizona Ballot Initiative, which is currently gathering signatures for the ballot initiative. He has offered to share his contact information as a resource for Arizona patients who face prosecution under this new law: 602-635-4990. For more information about Tom’s experience, please click his Attorney Profile button.

If not for the generosity of our supporters, we wouldn’t be here! We’d first like to express gratitude for our radio sponsors Alpine Miracle, Healthtera and Compassionate Certification Centers. We’d also like to thank Hempful Farms for supporting Veterans Voices, Erik Godal for our theme “Evergreen” and Dr. Bryan Doner for the Medical Marijuana Minute. We’d also like to shout out to XRQK Radio Network and Society Bytes Radio Network for broadcasting our show and Cannabis Radio for helping us spread the word online. We are grateful!