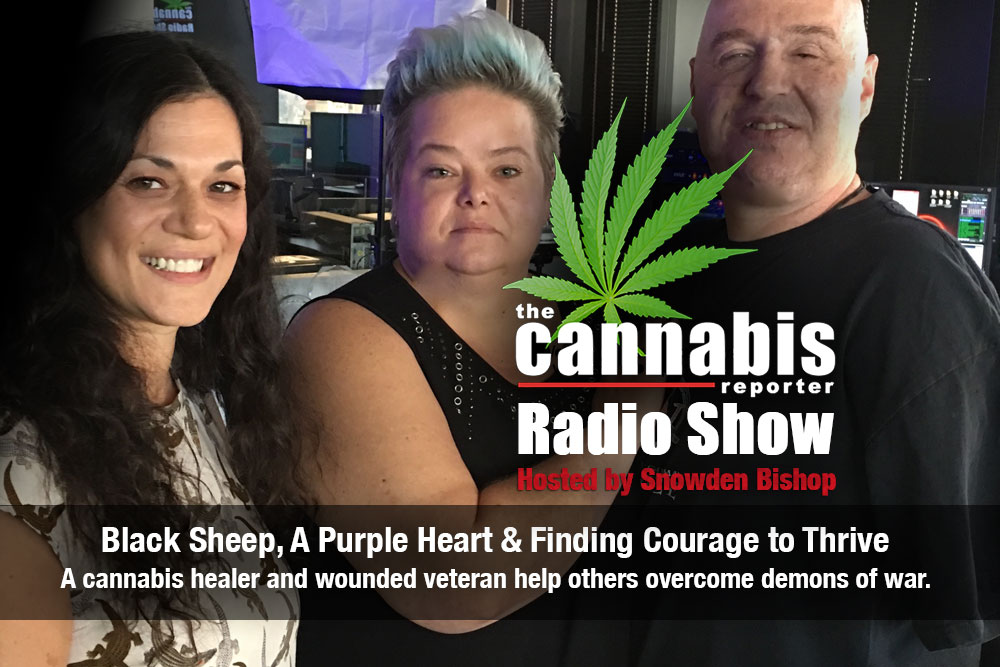 Today we had the honor of interviewing a Purple Heart recipient whose life was transformed when he defied convention and found healing with cannabis. Despite losing his sight and enduring the physical, emotional and psychological impact of surviving a cataclysmic explosion in the line of duty, he has persevered with a positive attitude and resolve to help others experiencing similar trauma. Not only did he survive, he and his wife are now thriving — and educating other veterans how to overcome their own demons of war.

Those who truly understand the benefits of cannabis already know how absurd our Federal marijuana laws are. But ongoing negative propaganda continues to influence those who are not convinced. The Veterans’ Administration has been slow to acknowledge the merits of treating PTSD and other battle wounds with medical marijuana. As we’ve learned in previous interviews, a growing number of veterans are taking matters into their own hands. Veterans who have found healing are eager to educate other veterans about ways in which cannabis can help them deal with the demons of war.

Today, we went deeper into that subject because, the stigma associated with marijuana coupled with strict rules about drug use in the military often dissuade veterans from seeking treatment with cannabis. Even though breaking with convention has potential to diminish the incidence of suicide and opioid overdose, it also means overcoming the fear of public consternation, disciplinary action and/or shame associate with breaking federal law. That’s something cannabis healer Liz Valentine calls the “Black Sheep Syndrome,” and it’s something she is working change.

It seems that education is the only way to break down the barriers and change public perception. It is so important for everyone to hear from the people who have overcome debilitating illness and injury because they made the courageous choice to overcome those barriers. That is why we’re here, and we hope that sharing these stories will make a positive impact on others in search of healing.

Liz Valentine is a genuine healer who is passionate about educating patients and caregivers about the healing properties of cannabis. Her experience as a manager of multiple dispensaries in Colorado contributed to her vast knowledge about medical marijuana strains, extracts and compounds.

As founder and principal of Green Star Doctors, she dedicates her life to educating patients and helping them overcome the stigma and fear associated with marijuana in order to find healing. She also has the unique distinction of being one of the first guests on The Cannabis Reporter Radio Show, when she elaborated on the dis-ease often felt by new medical marijuana patients.

Air Force Tech. Sgt. Matthew Slaydon is a highly decorated Iraq war veteran who earned a Purple Heart on Oct. 24, 2007, when he was severely wounded and lost his eye sight while inspecting an improvised explosive device in Iraq.

With his wife Annette at his side, he endured years of excruciating recovery through conventional therapy, which included dangerous prescription drugs that ultimately exacerbated his physical, emotional and psychological trauma. Eventually, he found healing with cannabis, but not until overcoming his own negative perception of illicit drugs. His courageous journey, along with his conviction to assist other injured veterans recover from traumatic injuries and demons of war, is one of true heroism.

We’d like to thank Windy West and our production team at Star Worldwide Networks for making us shine! Many thanks also go to our very own Nate Nichols for his Marijuana Minute updates and insightful contributions to the show. Of course, we’re also grateful to Castle Creek Music and Erik Godal, composer of our theme song, Evergreen. And thanks to all of you for listening! We welcome your feedback. Please contact us to suggest a topic or just say hello.

Abacus Health Products Announces ISS and Glass Lewis Recommendations For its Proposed Acquisition by Charlotte’s Web; Change to Virtual Only Special Meeting of Shareholders
May 25, 2020

COVID-19 Impact on the Composites Market by Fiber Type, Resin, End-use Industry and Region – Global Forecast to 2021 – ResearchAndMarkets.com
May 21, 2020