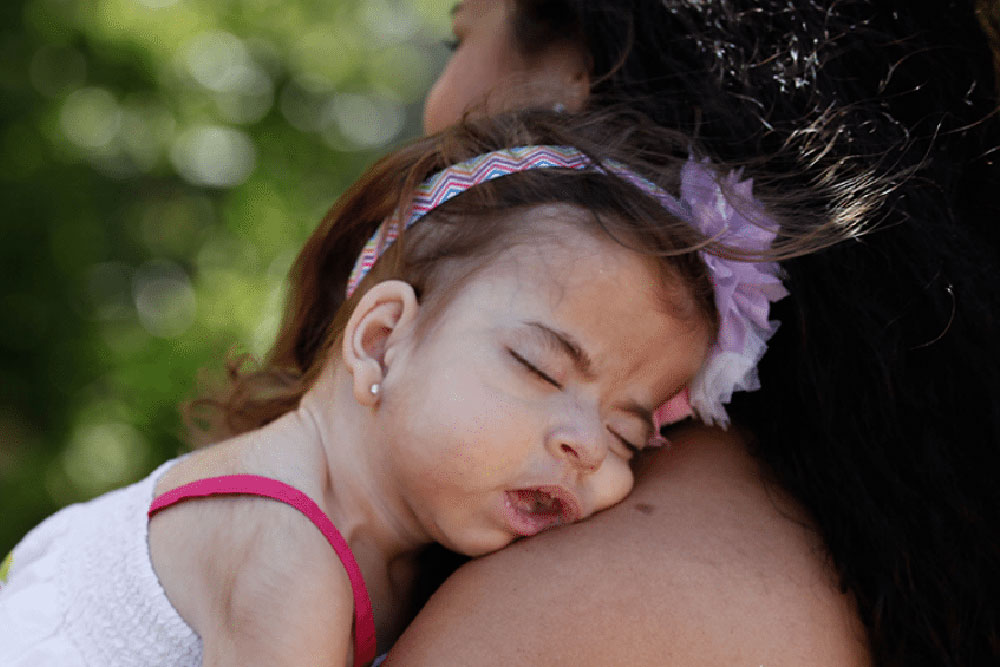 “Our daughter Sadie is an American champion that our President Elect would be proud of. This is our wish: meet Donald Trump to demonstrate her fighting spirit and urgent need to preserve her ability to receive medical marijuana.”

Baby Sadie Higuera was born severely developmentally disabled in Ramona, CA, on May 4, 2013. Soon after her birth, she was experiencing approximately 300 life-threatening seizures a day and her chances of survival were low. Her parents, Brian and Damaris Higuera were told that a rare congenital neurodegenerative disease called Schinzel Gideon Syndrome would keep their daughter in a vegetative state for the rest of her very short life.

“It was like she was always sleeping. All the doctors were doing were sedating her – That’s all they could do for her,” Brian said. Sadie had also developed a tumor on her liver. Their medical options were limited to harsh, toxic pharmaceuticals that would more likely end her life than provide a cure. When he learned how cannabis had helped other children with similar conditions, he reached out to anyone with resources about using it medicinally to treat Sadie’s condition. After an exhaustive search, he finally found a doctor willing to take on the challenge of treating an infant in Sadie’s condition.

“I gave her a dose of the oil and, after only 20 minutes, her eyes stopped twitching. 20 minutes later, I gave her another dose and her body stopped twitching. I couldn’t believe it,” said Brian. Results of treatment were almost immediate. For the first time in her young life, Sadie’s eyes were focusing and her seizures subsided. That was six months ago.

Since then, Sadie has improved dramatically. She is participating in physical therapy, sitting up on her own and becoming more tactile. The tumor on her liver has disappeared and she remains practically seizure free. Now three years old, Sadie attended her first day of school at a special needs preschool attached to the Ramona Elementary School near San Diego. It was an event that the Higuera family believes would never have happened if not for cannabis.

The Higuera family "Makes A Wish"

“Hemp has been a game changer for us, and for so many other families with children like Sadie,” Brian recently told ABC News 10 San Diego. In considering how to pay forward their good fortune and help others gain access to medical marijuana, the Higuera family decided to reach out to the Make-A-Wish Foundation in hopes of arranging a meeting through the foundation between Sadie and Mr. Trump. By sharing Sadie’s story with the next President, the family hopes to stress to him the importance of rescheduling cannabis.  Removing cannabis from its current Schedule I classification will encourage further research into its medical potential and increase nationwide access to marijuana.

Mr. Trump has been vocal in the past about allowing states to create medical marijuana programs. However, state laws permitting severely disabled children to receive cannabis treatment face uncertainty if the President Elect’s cabinet nominees are confirmed. Most notable, the nominee for Attorney General is vehemently opposed to marijuana.

Even under the current administration, which supports state rights to legalize cannabis, the future of medical marijuana remains on shaky ground. Despite executive orders to bar funding to enforce federal law in states that have legalized marijuana, the D.E.A. made an ambiguous announcement this week that it has expanded definitions of marijuana to include hemp-derived CBD oil in the Schedule 1 classification. The move, which vaguely implies potential impact on current access to hemp online and in states without medical marijuana access, was applauded by the pharmaceutical industry, according to an insider’s comment referenced by the D.E.A.’s Acting Administrator Chuck Rosenberg in the December 14, 2016 Federal Register.

Presidents have the ability to influence drug policy on a national level, which is why the Higuera family is hoping their wish to introduce Sadie to President Elect Donald Trump will be granted.

“Our daughter Sadie is an American champion that the President Elect would be proud of. This is our wish: meet Donald Trump to demonstrate Sadie’s fighting spirit and urgent need to preserve her ability to receive medical marijuana,” said Brian. “She exemplifies the importance of legitimizing CBDs as an organic, healthy treatment which has helped so many people beat the odds and live a life they could not have had otherwise.”

Sera Labs, a Leader in the CBD Industry with Proprietary Products and Multi-Channel Distribution Platform, to be acquired by CURE Pharmaceutical in a $20 Million Transaction
July 30, 2020