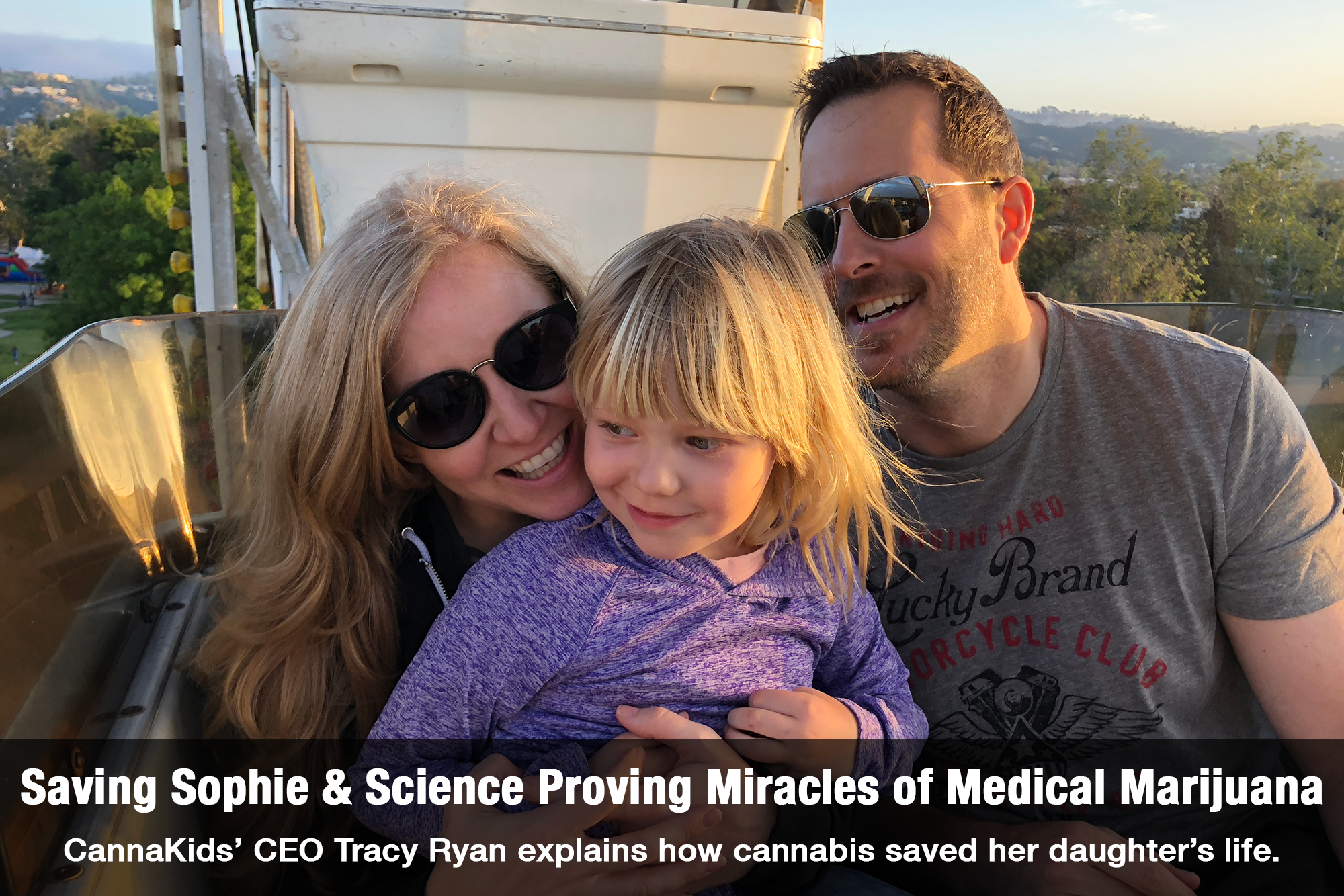 It’s hard to Imagine being a parent who learns that her beautiful baby girl has a rare form of terminal cancer that will require multiple rounds of chemotherapy with no guarantee it will help. It’s even harder to imagine what it must feel like to learn there is a cure only to find it’s out of reach. Sadly, this is not just a hypothetical scenario. It is a reality for too many parents around the nation — and not just in prohibition states.
Sophie Ryan was eight months old when she was diagnosed with a malignant brain tumor. The progression would be slow, but the form of cancer was difficult to treat, requiring multiple rounds of chemotherapy followed by blood transfusions to clear her tiny body of toxins. Within months of introducing cannabis as a supplemental therapy, Sophie’s tumor subsided, much to the astonishment of her doctors at UCLA Medical Center.  Since then, cannabis has made chemotherapy tolerable to the point she no longer needs blood transfusions. Now five years old Sophie is enjoying a happy, healthy childhood. Her cancer is nearly eradicated with the exception of a small portion of the tumor, which remains under control as of now.
Sophie is among the lucky children who live in a state where cannabis is already legal for medical use. Her doctors have been supportive of her parents’ choice to introduce cannabis as an alternative. Her story has has garnered the attention of a team of renowned scientists who are now studying the efficacy of cannabis for treating Sophie’s form of cancer in a clinical setting at Technion Institute in Israel.
Witnessing the medical miracle unfolding in front of them, her parents have devoted the last several years to research and development of extracts to treat Sophie and other children with the same condition. Under California’s medical marijuana program, they have been able to scale up over time with several new formulations that are now being used to treat other children and adults with complex medical conditions that were thought to have no cure.  They began working with Sophie’s doctors at UCLA to obtain a DEA license to study the impact of cannabis on her form of cancer and are spearheading the clinical research with Technion Institute. They have also raised funds to deliver free cannabinoid medicinals to other families with children that need them.
Ironically, they began to face a lot of unanticipated hardships after California’s new adult-use legalization took effect, mostly stemming from the new marijuana tax policy and other state mandates that are making it financially impossible for them to continue producing the number of formulas they have developed for a wide variety of hard-to-treat medical conditions. These new restrictions and taxes are also making it more and more difficult for families to afford the medicine their children need and nonprofit suppliers to help them now that they can no longer give “free” medicine to families who can’t afford it without violating a new law under the new adult-use regulation.
That’s the topic of this episode and Sophie’s mother, Tracy Ryan, joins us to explain how California’s new adult-use regulation is dampening her efforts to help patients afford medical marijuana. She also shares news about the scientific breakthroughs at UCLA and Technion showing promise in treating Sophie’s brain tumor as well as all other pediatric and adult cancers, autism, epilepsy and beyond.

Tracy Ryan is the CEO  for CannaKids, a California-based cooperative and CK Sciences, and the founder of the 501c3 non-profit SavingSophie.org. Tracy has worked on a global scale with families who are seeking education and treatment options for their loved ones, and has guided many patients to unheard of success. CannaKids is now on a trajectory to be one of the world’s leaders for cannabinoid therapies based on scientific research and is in collaboration with some of the top researchers, doctors and hospitals in the world. Tracy is on the Advisory Board of CURE Pharmaceutical and the Technion Institute in Israel, with which CannaKids has been sharing their meticulously tracked patient data in order to help further assist in their research. She is also serving on the University of California at Irvine’s Task Force that will work to design the first ever cannabis multidisciplinary college.  Tracy and CannaKids have also been the recipient of several industry awards, furthering her strength in the cannabis community as a key player and have been featured in many national and international news pieces including an appearance on The Doctors, National Geographic, Vice News, CNN, Entertainment Tonight, The Huffington Post, Telemundo, and many more. They are also the key focus of the Ricki Lake and Abby Epstein documentary, “Weed The People.”

If not for the generosity of our supporters, we wouldn’t be here! We’d first like to express gratitude for our radio sponsors Alpine Miracle, Healthtera and Compassionate Certification Centers. We’d also like to shout out to the composer of our theme “Evergreen,” Dr. Bryan Doner for the Medical Marijuana Minute and XRQK Radio Network, Society Bytes Radio and Cannabis Radio for helping us spread the word. We are grateful!