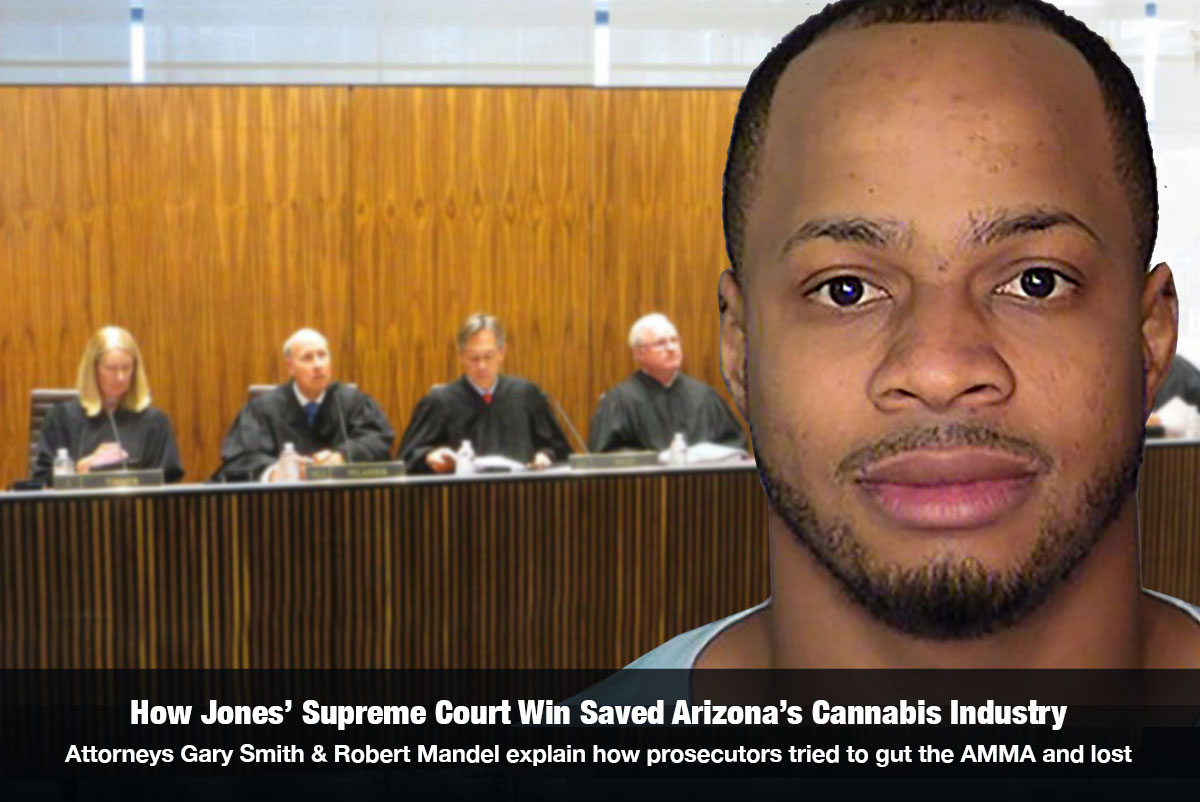 If you were with us last year, you might recall our interview with attorney Tom Dean about the Rodney Jones case, which had devastating implications for Arizona’s medical marijuana program. In case you missed it, Rodney Jones, a card-carrying medical marijuana patient, was arrested in 2013 after a routine traffic stop, when officers found him in possession of hashish, a cannabis derivative he had purchased legally at a licensed dispensary.

A year later, after prosecutors sufficiently convinced a jury that the hashish in his possession was not marijuana as defined in the AMMA, but rather cannabis, which is illegal under Arizona criminal code, Jones was convicted of felony possession and sentenced to a mandatory minimum sentence of more than three years. He spent two and a half years in prison before his appeal could be heard. When appellate court justices ruled in favor of the prosecutors, they sent Rodney Jones back to prison to serve out the rest of his sentence.

This definitely was a case of being in the wrong place at the wrong time. He was arrested in Yavapai County, jurisdiction of prosecutor Sheila Polk, who is notorious for her staunch opposition to the AMMA.

Her prosecution of Rodney Jones and subsequent conviction was a huge win for her and her campaign donors. The Appellate Court ruling essentially gutted protections for the vast majority of Arizona medical marijuana patients who rely on extracts for medical reasons.

By interpreting the medical marijuana act’s definition of “marijuana” as it applied to legal medical use to include only dried, smokable leaves, the jurists excluded the extracts and resins, which are deemed to be illegal substances per the definition of cannabis in Arizona’s criminal code. So, despite the obvious voter intent of the measure, all tinctures, resins, vape products, edibles and topicals containing extracts of the marijuana plant were rendered illegal for patients to use.

That changed last week when the Arizona Supreme Court reversed the Appellate denial, exonerated Rodney Jones and upheld the voters’ intent to legalize medicinal cannabis, including extracts and resins. Anything short of that would have destroyed the thriving industry in Arizona according to Rodney’s attorneys, Gary Smith and Robert Mandel, who are here to explain how the Supreme Court victory may have saved the industry and protected Arizona’s medical marijuana patients from facing the tragic circumstances.

Rob Mandel is a seasoned appellate and trial court litigation lawyer and a founding partner at Mandel Young, where he specializes in high-stakes commercial, constitutional, and public law disputes. He was the lead attorney who successfully argued on behalf of Rodney Jones at his Arizona Supreme Court appeal.

Also a member of the legal team representing amici Will Humbolt is attorney Gary Smith. He is a partner at the law firm, Smith Saks Kuzmich, where he specializes in cannabis law. He is also president and founding member of the board of the Arizona Cannabis Bar Association and frequently speaks at industry events.

If not for the generosity of our supporters, we wouldn’t be here! We’d first like to express gratitude for our radio sponsors, Sunstate Technologies and Cannasphere Biotech. We are grateful! Many thanks go to Erik Godal for our theme “Evergreen” and Dr. Bryan Doner for the Medical Marijuana Minute. We’d also like to shout out to XRQK Radio Network and Society Bytes Radio Network for broadcasting our show as well as  Compassionate Certification Centers and Cannabis Radio for helping us spread the word online. Image courtesy of Wikimedia CC License.