Missouri Vets Get a Voice: No MO Pills, Show Me Cannabis 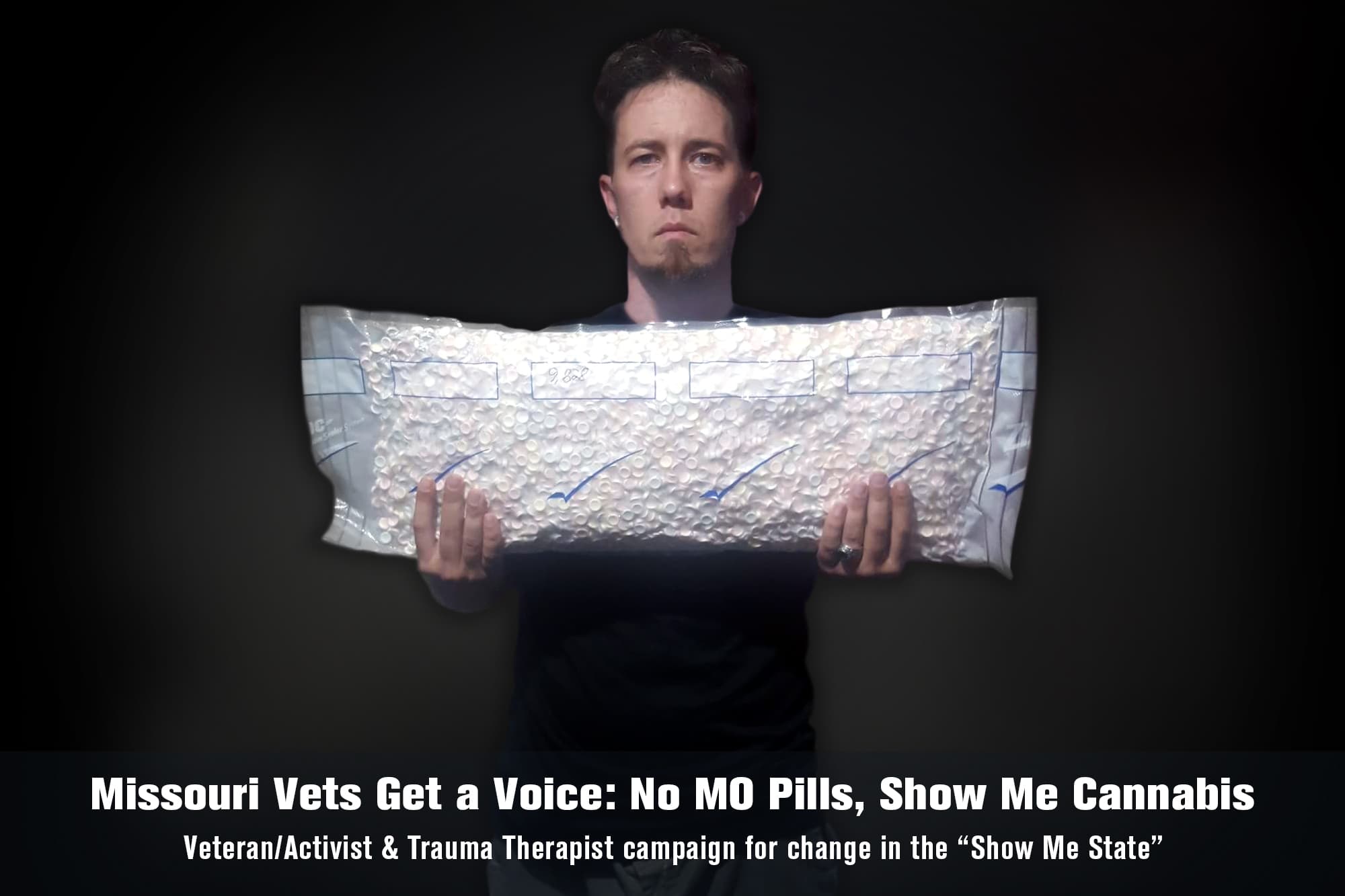 Hearing politicians defend prohibition can be a source of tremendous frustration for those of us who know better, particularly since we have unfettered access to indisputable evidence that cannabis is a harmless, therapeutic plant, which is necessary for human health. Cannabis has helped so many suffering with pain, depression and critical illness come off of dangerous pharmaceuticals that often fail to work and cause life-threatening complications like addiction, even death.

Before the World Wide Web, information about cannabis was limited to a handful of obscure books, articles in counter-culture publications and occasional headlines admonishing controversial activists who dared to expose the injustice of prohibition. Despite ever-increasing demand of millions of closeted cannabis users, few self-respecting adults would risk being stigmatized for advocating for an illegal drug known as “The Devil’s Weed.”

But, today, there is no shortage of credible information about the healing power of cannabis that is accessible online to anyone with a desire to learn about it. The information highway has provided a lens through which anyone can bear witness to miracles of medical marijuana. It’s an expansive platform from which to educate a skeptical public and galvanize a new generation of mainstream advocates.

But having access to so much information about cannabis a can be a blessing or a curse. For those of us fortunate enough to live in regulation states, it’s a blessing. For those living in prohibition states, it must feel like a curse, particularly for veterans, athletes, terminally ill patients and others who have no access despite knowing how cannabis could help them, or even save their lives.

With a handful of states like Missouri considering regulation for the very first time next year, advocates have work ahead to prevent being overpowered by lobbies that will stop at nothing to prevent it from happening. They may have financial means to influence politics, but we have something much more powerful if we choose to use it to our advantage.

It’s called voice. Our guests consider theirs as a blessing. They’re using their voices to call out the injustice of cannabis prohibition and galvanizing a coalition of change in the Show Me State of Missouri. They’ll tell us how they’re doing it right after Dr. Bryan Doner’s Medical Marijuana Minute.

Sergeant Joshua Lee is a retired member of the Missouri National Guard and veteran of the Afghanistan war. Medically discharged with ongoing combat-related health issues including PTSD and inflammatory arthritis and coping with addiction and other complications caused by the cocktail of anti-depressants, opiates, SSRIs, benzodiazepines, anti-anxiety, blood pressure meds and other drugs he had been prescribed by his doctors. Upon learning about the benefits of cannabis, he and his wife Julia traveled to Colorado, where he tried cannabis for the first time and began to feel “normal” for the first time since going to war. The experienced inspired him to advocate for cannabis policy reform in Missouri and form the Veteran’s Alliance for Compassionate Access, a 501(c)4 dedicated to political and social reform through science and education, by empowering veterans to find their voice.

Julia Lee, M.Ed., LPC is a mental health therapist who has worked in the fields of trauma and family counseling since 2004. Upon graduating with a Bachelors in Bible as a Literature and Psychology from Ozark Christian College, she worked in Child Welfare as an Intensive Family Reunification Specialist for a year, working alongside Children’s Division to re-unify families whose children had been removed from the home. She later spent several years working as a mental health therapist in specializing in trauma after graduating from Stephens College in 2013 with a Master’s Degree in Education, Emphasis in Counseling, dual tracked with Counseling and Marriage and Family Therapy. Today, she works full-time with her husband Joshua as the Assistant Executive Director of Veteran’s Alliance for Compassionate Access to help shape our policies and guidelines in our fight for improved mental health reform.

If not for the generosity of our supporters, we wouldn’t be here! We’d first like to express gratitude for our radio sponsors Hemp Meds, Healthtera and Compassionate Certification Centers. We’d also like to shout out to our producer, Ed, engineer John and the team at Star Worldwide Networks, Erik Godal, the composer of our theme “Evergreen,” Dr. Bryan Doner for the Medical Marijuana Minute and XRQK Radio Network, Society Bytes Radio and Be Real Management for helping us spread the word. We are grateful!